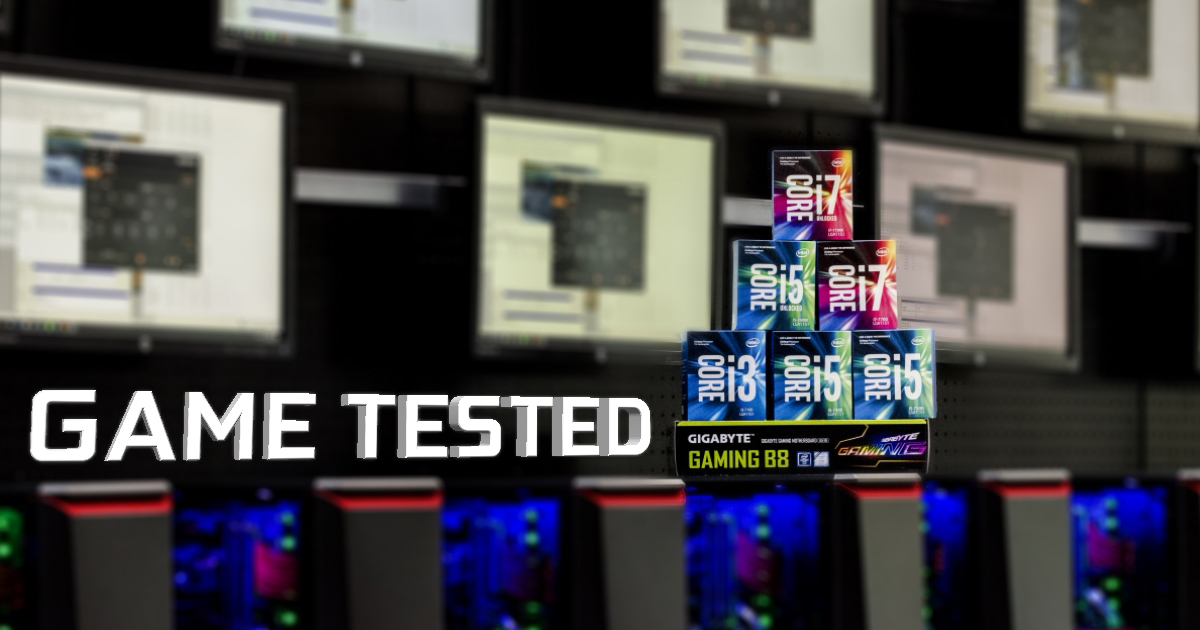 GGPC has been busy capturing gameplay with the new Kaby Lake CPU range from intel \o/ We started things off with the new i3 (we even managed to get the new “unlocked” i3-7350K!) and we’ve gone all the way into the powerful i7 🙂 As usual we’ll be testing in-game but this time with no additional graphics cards fitted in our systems…

Gaming with no dedicated graphics card might sound a little crazy, and in most cases it really is but with the right game you can still enjoy some pretty high settings and go for that 60FPS @ 1080p sweet spot 🙂

Of course when you throw a much heavier game at the CPU with no Graphics Card supporting things it gets a lot tougher! Below is a quick test playing Overwatch with just the i5-6400 CPU and while it’s still very playable we’ve had to turn down all of the beautiful graphics settings and we still couldn’t quite get to our 60FPS 1080P target – got pretty close though!

Swinging back around to a game that’s a lot lighter but still pretty popular we jumped into a CSGO match to see just what the CPU alone could do, while we maintained pretty close to 60FPS things were definitely still pretty tight! Much like Overwatch above adding a little GPU like the RX 460 goes a long way performance wise 🙂

When we hit League of Legends with the Skylake i5-6400 things really started looking good, we were pretty amazed to see LOL running so beautifully and we managed to get into a nice brawl in the bottom lane for the capture, settings wise we’ll show them at the end of every video – this is Character Detail: Very High, Environment Quality: Very High, Effects Quality: High and Shadows: Medium and in the clip you’ll see the FPS dip slightly below 60FPS – this provides us with a nice comparison point as we move into the tests with the new Kaby Lakes!

For our Kaby Lake system we’ve built using the very affordable ASRock Z270 motherboard, Avexir 2400MHz DDR4 and a 250GB SSD loaded with Windows 10 Home 64Bit. Originally we set things up with the B250 chipset but quickly realised we’d need to move onto a Z series for testing the “K” series unlocked CPU 🙂

All of the Kaby Lake CPU we’ll be testing for this blog are packing integrated graphics known as Intel HD Graphics 630 series so we don’t expect too much swing between the quad core i5 and the i7, what’s going to be really interesting is see how things go with the new dual core unlocked i3-7350K so let’s get started there!

Firstly, seeing as this is an unlocked processor we jumped into the bios (by pressing DEL as the computer was turned on) and edited the CPU Ratio + Fixed Voltage values shown here for a quick & easy 5GHz overclock. Once in game a little tweaking was still needed for the settings bringing down shadows and effect quality a little to ensure FPS stayed very close to 60 during some pretty colourful team fights 🙂

Jumping into a few quick matches with the new Kaby Lake i5 saw solid boost in FPS and even allowed us to push up the effects details again which was really nice, the peak framerate difference between the i5 and previous i3 (even with our 5GHz OC) was instantly noticeable and while both performed well above expectations, if you’re about to build a new system the i5-7500 certainly hits a pretty sweet spot \o/

Rounding up the tests we move our way through the new i7 range, as expected performance in game was very similar to the i5 above although again the peak FPS did reach just that little bit higher, it would be very hard to spot this in game though as once the action starts up both do really well. We played a few extra matches with these ones just to double check the shadows quality settings couldn’t be pushed to max and in most cases it can, however in the bigger team fights (especially around bases or big rift beasts) fps can dip very slightly under 60 with the shadows higher than in the gameplay FPS test below and as we like to turn V-Sync on usually keeping everything above 60 is the goal!

So what’s the verdict with Kaby Lake? It’s GOOD!

The i3-7100 at 3.9GHz performance was right up there with the unlocked i3-7350K in game, if you’re wanting to have a play around with overclocking though that “K” i3 sure is a great way to get into things (just make sure you grab a Z series mobo!) – we didn’t expect to hit 5GHz stable so easily and if it was ours (this one was a loan from intel) we would have kept going for sure 🙂

Once you hit those sweet Kaby Lake i5 things get really good, the quad cores pushed out some fantastic performance right through from the i5-7400 all the way up to the i5-7600K – These are pretty great really and going forward GGPC will be using them for most of our Gaming PC designs.

If you’re going with the i7 series you’ll still notice a difference in game, but it’s harder to spot vs the difference between the i3 & i5. As with our eSports Skylake builds we’ll likely be using these ones in special gaming PC designed to stream gameplay via Twitch, XSplit and YouTube 🙂 Even these super powerful CPU have a little trouble when it comes to shadows, but hey – graphics cards gotta have something to do right!

We’ll continue to update this blog as we learn new things and get our hands on our own i3-7350K for potentially destructive max OC check 😛 Lots of fun times ahead so be sure to keep your eyes on the GGPC Computers Blog for the latest!