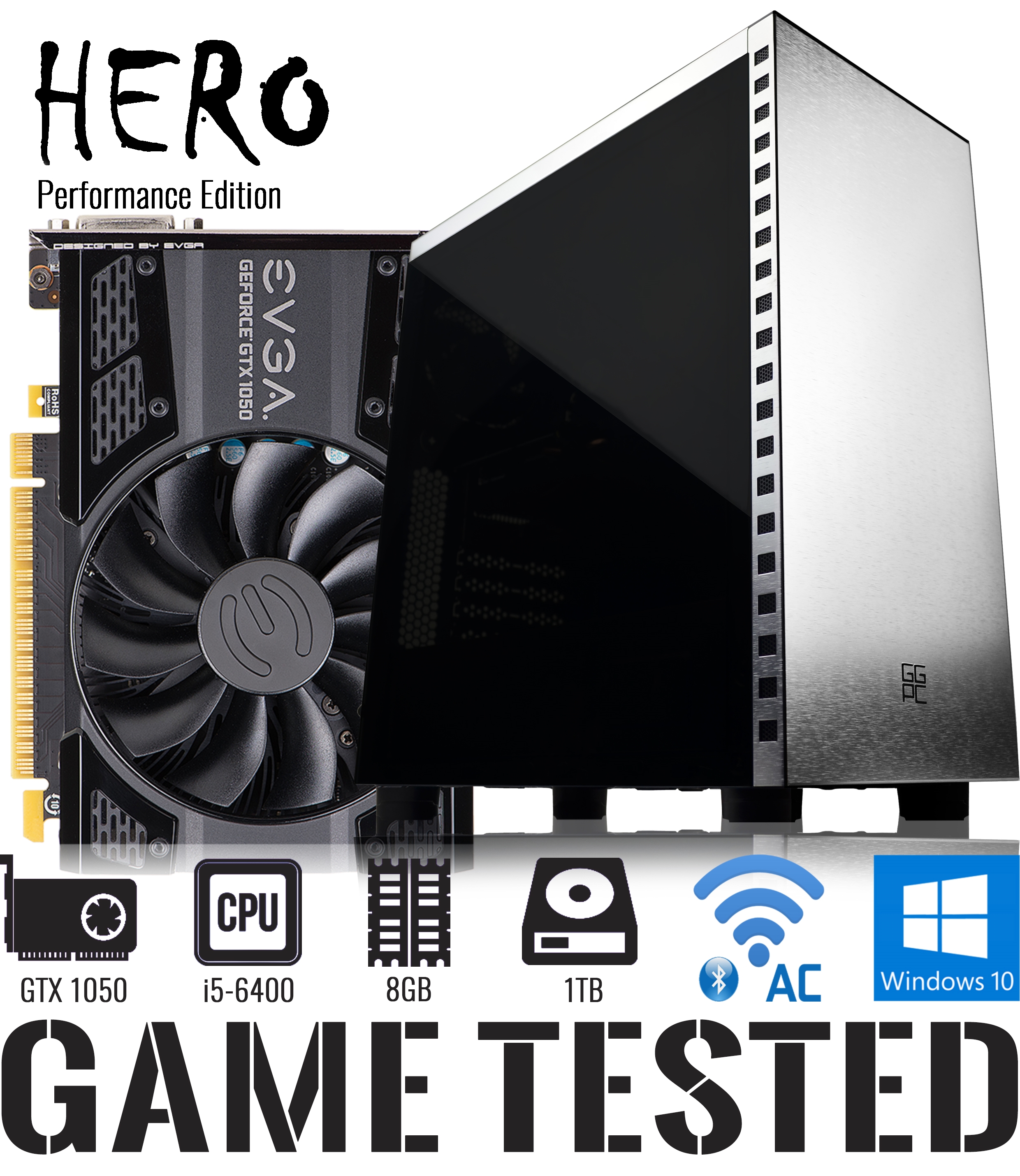 Fresh from the workshop our latest GGPC Hero Gaming PC returns armed with EVGA GTX 1050 graphics \o/ Like all GGPC builds we’re always tinkering with slightly different components to see if we can squeeze out a little more performance for each $ spent, and on that note – let’s take a look at the latest tweaks!

Firstly, a really cool update that effects all our Gaming PC in the GGPC custom chassis – we’ve taken out all the LED strip lighting kits and static fans and replaced both with RGB cooling 😛 A total of three RGB fans are now fitted in the front panel of the chassis and both the colour and fan speed can be adjusted via an included remote control, we left the rear 120mm outtake in the chassis as a standard GGPC black fan so you can game comfortably without a blinding LED directly in your line of sight. When the rig is on your desk and the glow from the front shines backwards to light up the beautiful components inside 🙂 Taking out the strips has also brought down the internal temperature a little and being able to tweak the fan speeds allows the gaming rig to run even quieter than before.

Another little tweak is a small update to the internal AC Wireless cards we use which now supports Bluetooth 4.2, this gives us improvements in three areas – co-existence (bluetooth and 4G (LTE) didn’t get on well, this is now fixed), smarter connectivity (improved re-connection timeout for saving battery life) and improved data transfer (connects more things!). Oh, one last thing – it’s wayyy faster than the previous versions 😛

Now onto a tweak specifically for the Hero build – we added a new GTX 1050 from EVGA 🙂 This one’s as much about ascetics as performance with the new GPU being a nice gunmetal grey that suits the case perfectly and in-game it’s a little beast!

In our last blog on the Hero we tested to see just how much performance we could get by overclocking the graphics but before we get into that let’s see what the new graphics card can do at factory settings with some in-game performance tests, after all “What is a good gaming PC?” can only be answered by “it plays the games you want to play!”

First up, the new Hero proves itself to be a good gaming PC for Overwatch players by keeping things very smooth as we get up close and personal with Roadhog and his wonderful hook 😛

If you’re thinking about getting a good gaming PC for Minecraft you’ll probably be interested in playing with Shaders on, for our tests here we installed Optifine HD D3 Ultra + Sildurs Vibrant Shaders v1.153 Medium and then went for our signature run around looking for a nice town by the water 🙂

This next one’s still under development so we’ll be stepping back in to test things out with each update but right now the just released Star Marine early access for Star Citizen is working very well with these gaming PC specs, we happily ran around the awesome looking space stations chasing down bandits while having a blast being sneaky in space 🙂

Heaps of more games to test and fun times ahead! You can check out more GTX 1050 Gameplay FPS Tests here and many more on our GGPC YouTube Channel, keep your eyes on the GGPC Computers Blog and we’ll update with the latest.