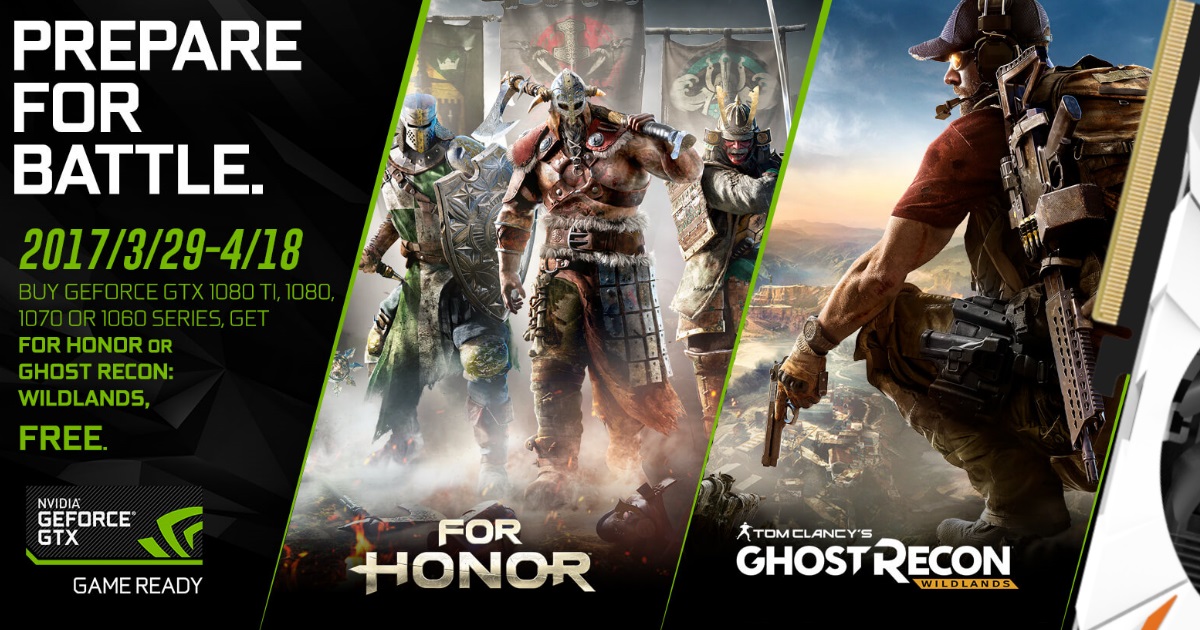 UPDATE: This promotion has now ended, you have until the 30th Jun to redeem your codes.

Play a battle-hardened warrior in For Honor or go behind enemy lines to take down the cartel in Ghost Recon: Wildlands. For a limited time, claim your choice of these Ubisoft games as a bonus when you gear up with selected GTX 1070, GTX 1080, GTX 1080Ti graphics cards or Gaming PCs and Gaming Laptops featuring these beasts!

As usual the hardest part is going to be deciding which game to choose, so let’s take a closer look at both options.

Bolivia, a few years from now. The country has become the largest cocaine producer in the world. The Santa Blanca drug cartel has turned the country into a narco-state, leading to lawlessness, injustice, and violence. The Ghosts, an elite US Special Forces team, is sent behind enemy lines to wreak havoc and takedown the cartel.

This one enjoyed the largest turnout during the Ubisoft open beta phase and is best played with a group of friends, if you find yourself in solo queue being a helicopter pilot or driver for a bunch of randoms is still pretty darn fun as well!

Next up – For Honor!

This new hack’n’slash capture’n’hold game proved itself early on with some very beautiful graphics and a slick melee battle system that had us ramming our way through the ranks to take on opposing warriors in fierce hand to hand (or blade to blade) combat.

Many, many hours have been spent in For Honor at GGPC NZ, the matches often become fantastically close battles with the skill based player matching systems working very well indeed – this one is truly exceptional if you play often, you’ll start to recognise opponents from previous encounters in game and the focus shifts from an all out battle to hunting each other down relentlessly with some face-offs lasting the entire round.

This is a register to redeem promotion, once you’ve got your awesome new hardware simply visit the registration sites as below depending on your chosen flavour, enter the details as prompted and you’ll get a game code via email 🙂