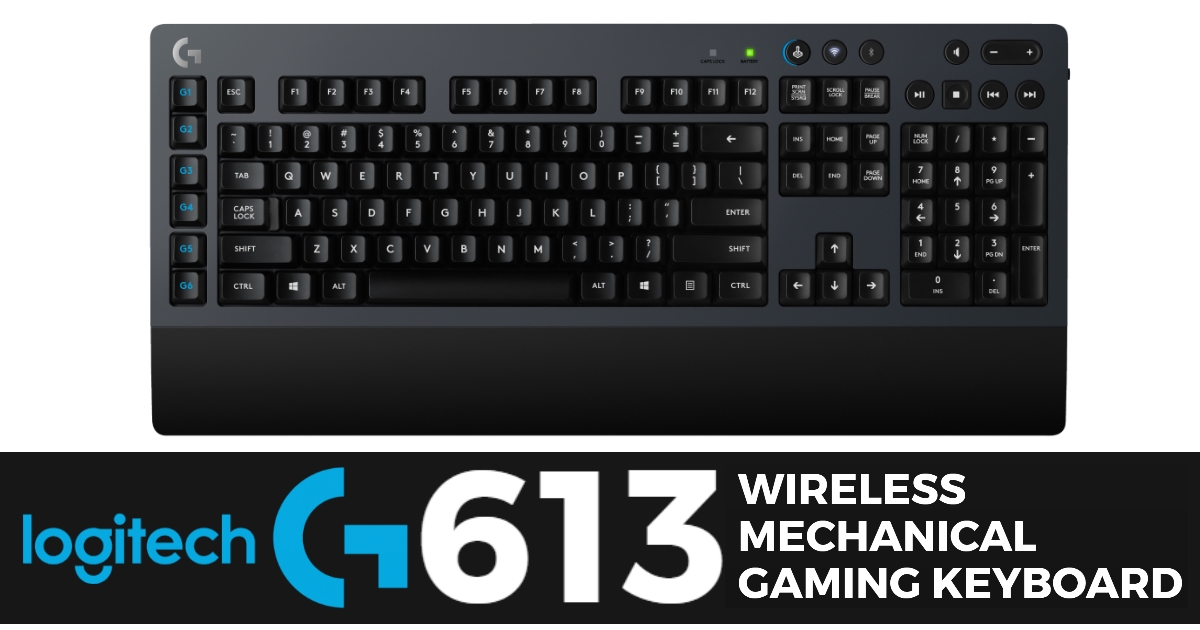 The G613 is a next generation wireless keyboard perfect for living room gamers who are looking for the satisfying click of mechanical switches and the freedom of wireless 🙂 Logitech have used their new LIGHTSPEED wireless technology as well and this delivers a mind-blowing 1 ms report rate for super-fast and responsive gaming, this is the same professional-grade wireless solution that’s built into the exceptional G703 and G903 wireless gaming mice.

They’ve made it savvy for the lounge by fitting a solid wrist rest onto the front, it’s also a little bit longer than the G413 with the additional G-Keys lined up on the left for gamers.

Being a living room savvy device Logitech have also taken care of a few additional features to make this keyboard even better – along the top you’ll find a host of quick media control buttons, these will allow you to quickly adjust volume, fast-forward, rewind and all that good stuff, what’s even cooler though is that Logitech have included Bluetooth connectivity as well as wireless, and with a quick-change button up beside the media controls you can hot swap between devices with ease!  Included with the keyboard is also a nice smartphone stand as well, similar to the one included with the G910 Orion Spectrum but this time in black.

Romer-G mechanical switches deliver precise mechanical performance with that signature ultra fast actuation we love, for those newbies coming to this new switch from something like a cherry blue, what makes the Romer-G switches so good is that your key-presses register at just 1.5 mm depth, around 25% faster than normal mechanical switches providing great response times in game – once you’re used to it 😛 Unlike many of the Logitech G mechanical keyboards we’ve been seeing recently, the G613 has got six dedicated macro G-keys so installing the Logitech Gaming Software is still a must even without the RGB options – it is a little odd to have keyboard without LED lighting now, but on the other hand we do understand, sacrifices must be made for battery life – there is a button that will light up though, the battery life warning indicator turns on when you’re down to 10% apparently 🙂

Logitech boasts that we’ll get 18 months of battery life on the two AA-batteries included with the kit – we’ll update our GGPC PC Gaming Blog with the latest as we test this new gaming keyboard out!

I get the feeling this is going to look utterly aw