Nvidia have a new game bonus offer and it’s for those gearing up with the RTX 3080, RTX 3090 or RTX 3070 graphics cards, or gaming PC featuring this awesome hardware.

WATCH DOG: LEGION: Gear up and get ready for some awesome hack-attacking! With an entire population of potential recruits and the city’s technology at your fingertips, you’ll need to hack, infiltrate, and fight your way to a liberated London.

The full game is set launch on October 29th 2020 and the Ubisoft team worked with Nvidia to bring gamer’s the ultimate experience, enhanced with immersive ray-traced reflections and performance-accelerating DLSS!

This promotion is only available from selected RTX graphics cards, quick links below for all models included in this promotion. (See the full range of Nvidia RTX at PB Tech)

Once you’ve got your awesome new hardware, you’ll need to register to redeem your game code, see quick links below for Desktop Graphics Cards included in the promotion.

Want to see more while you wait? Enter the Watch Dogs Legion universe in this intense chase through a dystopian London created by Emmy awards winner Alberto Mielgo.

UPDATE: This promotion has been extended until September 30th!

Nvidia are back again with another good game bonus offer!

Gear up and get ready for some awesome team tactical gaming with the latest register to redeem TOM CLANCY’S RAINBOW SIX® SIEGE GOLD EDITION game code for those getting themselves a selected RTX Graphics Card, or Gaming PC featuring this hardware.

You’ll need to get in quick for this one though, the offer is only valid on purchases from July 30th – September 30th 2020. (Original end date August 28th)

This offer is only available from selected RTX graphics cards, quick links below for all models included in this promotion. (See the full range of Nvidia at PB Tech)

Once you’ve got your awesome new hardware, you’ll need to register to redeem your game code, see quick links below for Desktop Graphics Cards or Gaming PC featuring these included in the promotion.

On defence: Coordinate with your team to transform your environments into strongholds. Trap, fortify and create defensive systems to prevent being breached by the enemy.

The Gold Edition pack allows the player to choose from dozens of highly trained, Special Forces operators from around the world. Deploy the latest technology to track enemy movement. Shatter walls to open new lines of fire. Breach ceilings and floors to create new access points. Employ every weapon and gadget from your deadly arsenal to locate, manipulate and destroy your enemies and the environment around them.

Running high frames and refresh rates on competitive games allow you to see things sooner and hit what you are aiming at. This Tom Clancy’s Rainbow Six Siege high FPS and Hz video shows the benefits of using a powerful graphics card like the GeForce RTX 2080Ti with a 240 Hz monitor.

The base game feels like a modern Counterstrike at first, so you can jump in and get into the lethal shooter gameplay side right away, but much like CS as you learn the various levels the game starts to evolve into a very deep, rather slow tactical shooter, packed full of glorious PVP misdirection and bait movements.

More than just point and shoot, there is a real emphasis on using environmental sounds to locate the enemies in this one too, adding to the tension and everyone slowly creeps about the place, peeping through holes in walls and popping off rounds to cover the sounds created elsewhere.

You can play the game in a single-player mode they call ‘situations’ and this is great for trying out new things without having to wait for the match to end to try things again. Multiplayer is also doable in solo queue but the game really comes into its own when you team up with mates and get on the microphones.

You don’t actually need to have the highest-end graphics card to enjoy this game too, 60+ FPS is achievable on entry-level GTX configs (remember this game bonus offer is ONLY for RTX graphics cards though), simply don a riot shield, work with your team, and have fun emptying the clip 🙂

Every year the best and biggest names in PC Gaming hardware get together in Taipei to show off their upcoming tech in an exhibition known as Computex and this year the team from Good Gaming PC NZ joined the frey to hunt down the coolest components, gaming gear and computer gadgets 🙂  This event also times itself with a series of rig modding and building competitions held around the world and becomes an ideal meeting spot for custom gaming PC builders to exchange ideas and show off their creations.

First up, best in graphics cards!

There have been two shining stars of the show in this field so far, new tech from Corsair and Phanteks both based around making the most of the new Nvidia GTX 1080 graphics cards that released just as Computex 2016 was about to begin (coincidence, I think not).

If you’re wanting to really make the most of the new graphics power in the GTX1080 Corsair and MSi have gotten together and created a maintenance free liquid cooling solution they call the Sea Hawk that will allow you to push this beast to the limit without fuss 🙂 It’s a very tidy piece of kit that’s ideal for making extremely high performance gaming PC builds easily. 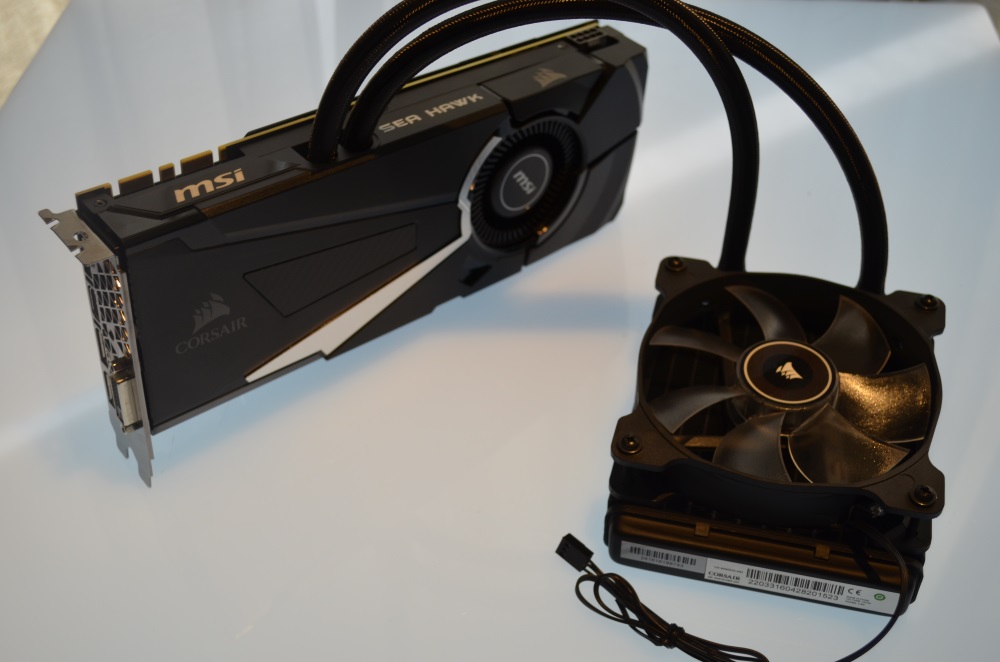 If you’ve wanting to make something with top teir performance and a really custom look things are getting pretty amazing with some exciting new tech from the team at Phanteks.  They’ve created a pretty impressive looking custom waterblock for the GTX 1080 that catches the light perfectly and you’ll be able to customize your new super cool cards with all the RGB goodness you want 🙂 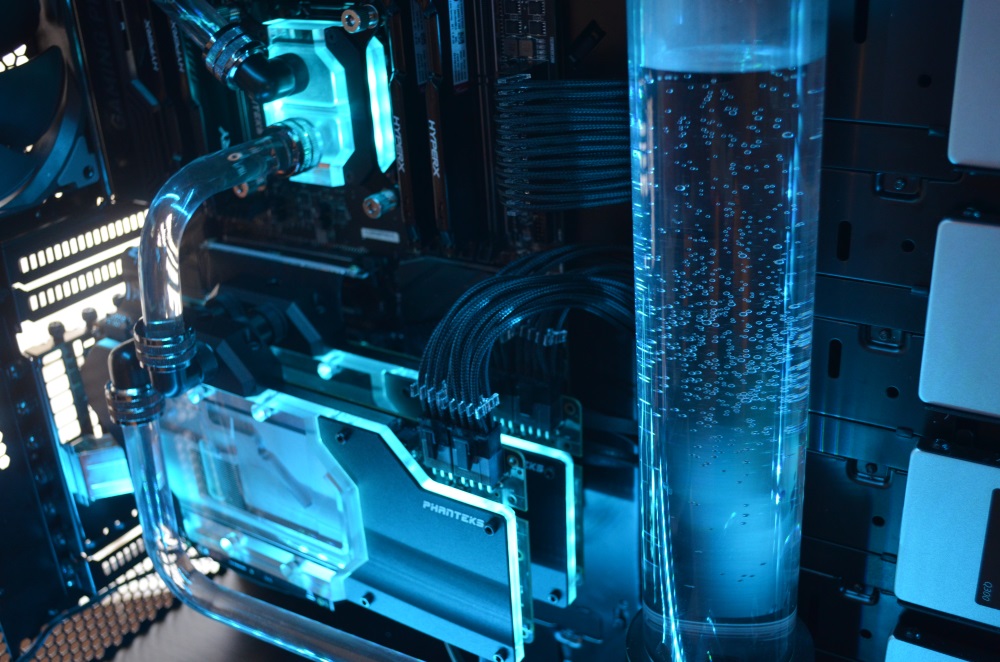 Next, some very unique chassis!

There have been two that certainly deserve this title and the first is aptly named Dream Box, with this DIY-kit, customization is mandatory 🙂  Unlike other mod-savvy chassis solutions, the new Dream Box DIY-kit allows you to create things in a way that feels a bit like lego.

The other favourite so far is pretty sweet not only because of the creativity but also because it’s essentially FREE, those fine folks at ThermalTake have created a hub they call the ThermalTake 3D Makers which provides schematics for 3D printing parts to mod your chassis with, right now they are displaying at the show a chassis that’s pretty similar to the popular TT P5 called the Core P1 and say this is going to be available for download – crazy cool! 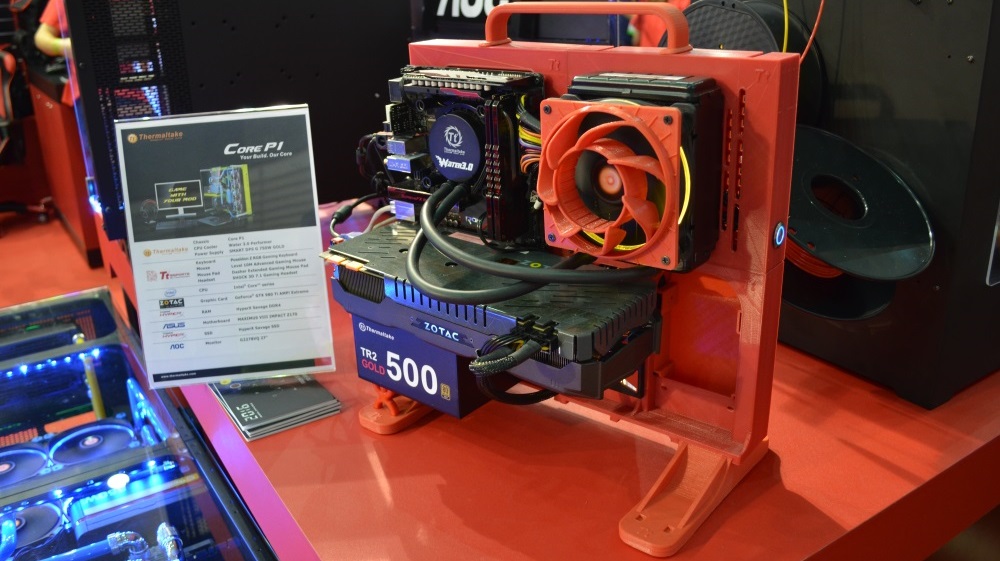 How about some RGB portable solid state storage?

Avexir have refined their design and are busy showing off a new SSD, this latest drive features similar RGB lighting as the previous version but is much slimmer and also has a very handy USB Type C connection allowing it to be used as a portable hard drive if needed – awesome! 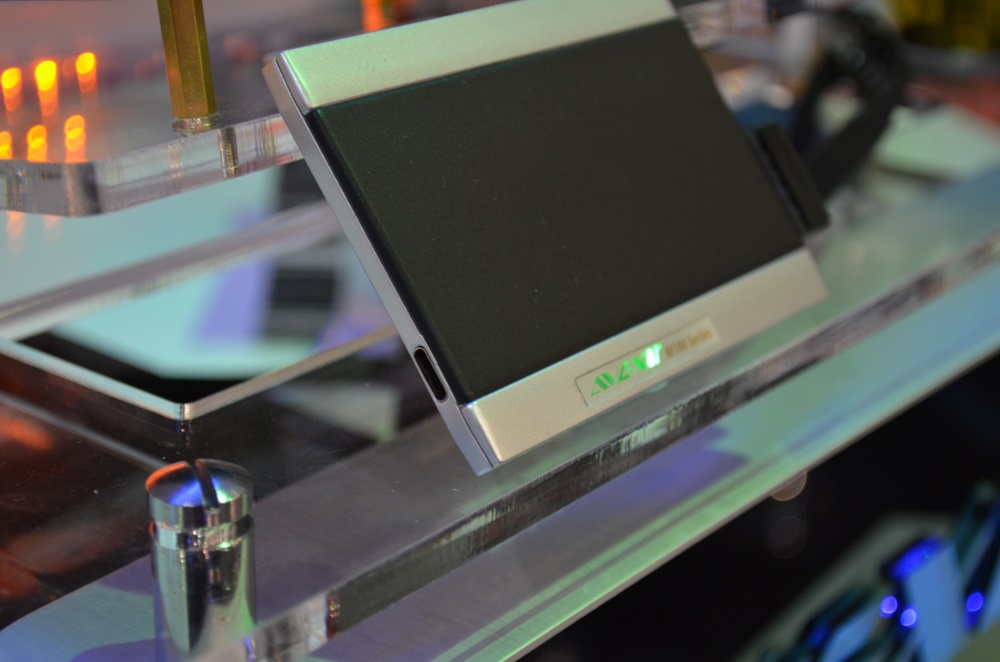 And to round things off – best in gaming gear!

This one caught us by surprise and we’re off to capture some fresh video of this wonderful keyboard in action first thing tomorrow so we can show you just how cool it is (update: here’s a video)  From the design team at Zalman comes a new gaming keyboard they are calling the Z-Machine, available in a range of great colours this driverless keyboard has features and effects that really need to be seen to be believed. 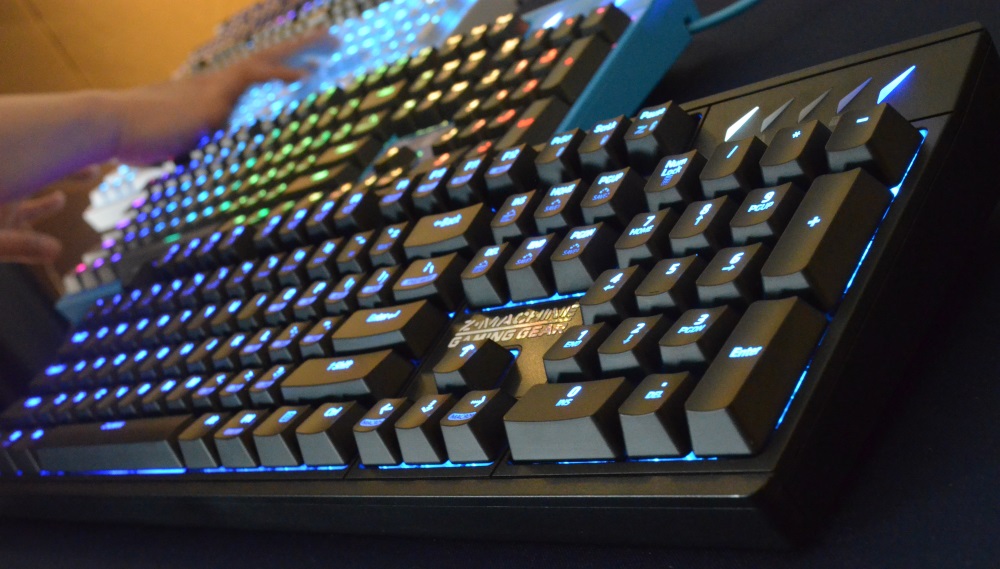 This is just a little snippet of what we’ve found so far, be sure to keep your eyes on our computers blog and instagram for more excellent gear as we find it!