Promotion details as below!

SThe bonus this time around is an awesome green Nvidia tracksuit for use in PUBG, so you’ll have to have to own the PUBG game to use it, you can check out the T&C here. The tracksuit is actually made up of two in-game items, an Nvidia jersey jacket + matching Nvidia pants.

Claiming your bonus is easy, but it depends on the brand of graphics card you’ve purchased – see below for Asus, Gigabyte Aorus and EVGA NZ links!

Now that you’ve got your code, update or install the latest version of GeForce Experience by clicking onto the link: https://www.geforce.com/geforce-experience/download 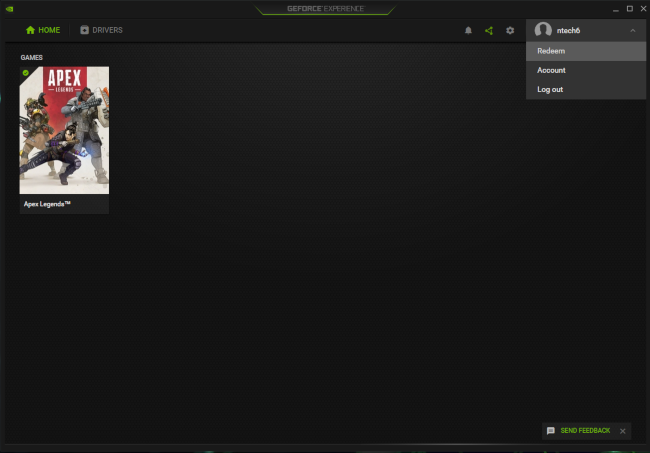 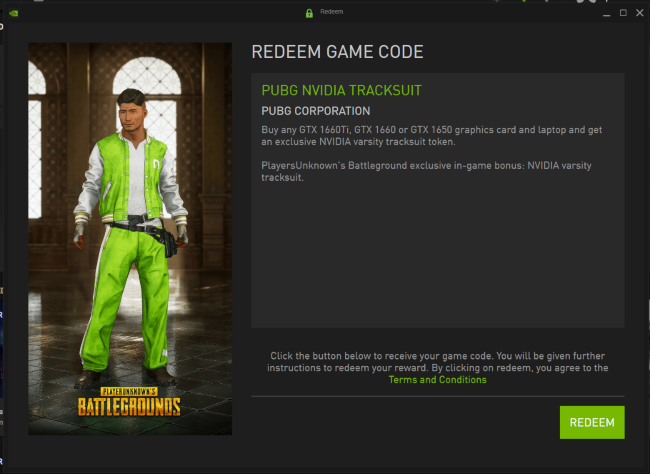 4. For PlayerUnknown’s Battlegrounds, you will see a pop-up window. Copy the second game code in gray box “xxxx-xxxx-xxxx-xxxx” (16 letters with hyphen) and Click “Complete your redemption by following this link” 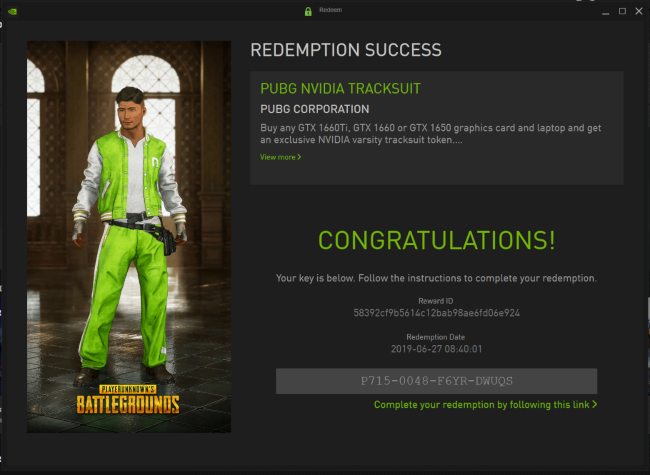 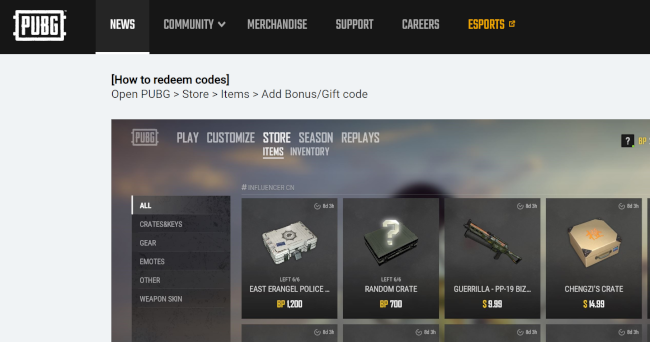 7. Enter the second redeem code to complete your redemption 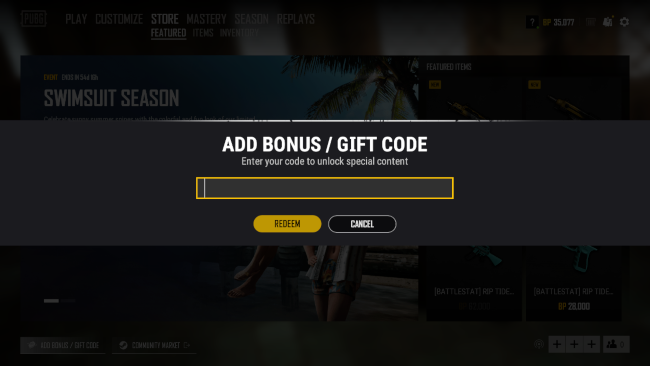 8. The Tracksuit will be listed in your CUSTOMIZE/WARDROBE, let’s equip your avatar! 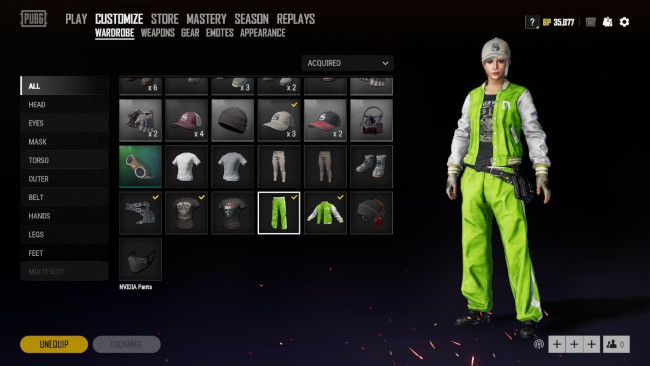 9. And you are done! GAME ON and BE THE LAST ONE STANDING! 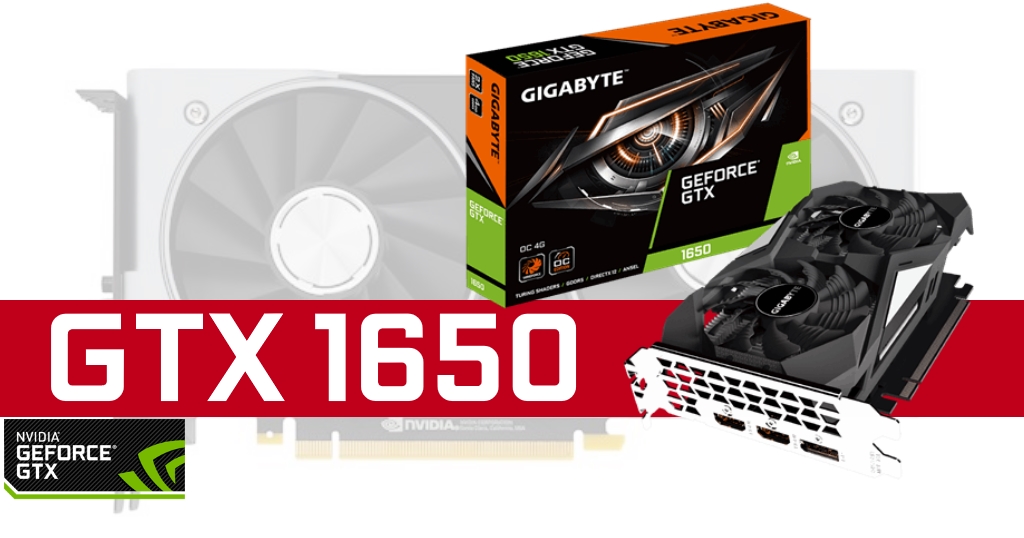 The new GTX 1650 Graphics Card is available now in New Zealand, giving us a another great low cost option for gaming PC builds!

Designed to be the cheapest option in the new GTX 16XX series, these new GTX 1650 position themselves just above the GTX 1050Ti performance wise, and just behind the GTX 1060 – for a similar price. In games it’s looking very good indeed, the GTX1650 is a nice upgrade from the popular GTX 1050, or a very nice upgrade from the GTX 950 🙂 The best bit is we get to enjoy the updated cooler designs from the masters at Gigabyte, Asus and EVGA, so with these new cards in our systems they’ll look and run better than ever.

Looking specifically at the current PC chart-toppers, Apex Legends, Fortnite and PUBG, a little tweaking to the settings gives us excellent performance even in some pretty intense fire fights.

The smaller size and affordable price point make these new GTX 1650 a top choice for a lounge computer, perfect for playing games with your mates – the new Mortal Kombat is looking particularly good!

Looking closer at the fastest models from the new arrivals, namely the EVGA SC Black Edition and Gaming Edition, both these GTX 1650 models have an extremely fat custom cooler, not long, just heavy on the slots it takes up. As this cooler really is big, be aware if you’re planning a PC with it first check your motherboard spacing (the graphics card might block a slot you had intended for WiFi). Both require an additional 6Pin power input so plan for 75watts and also important to note is there are just 3 monitor outputs on these new GPU, 1x HDMI (4K 60FPS ready) and 2x DisplayPorts.

We can’t wait to build with all the new options as they arrive in NZ, the new Gigabyte version looks especially awesome with the black/grey coolers and slimmer slot form factor to allow for more traditional Gaming PC builds, and we’re excited to see which versions have no additional 6Pin required for some mini Gaming PC builds, whatever the case it looks like fun times ahead! 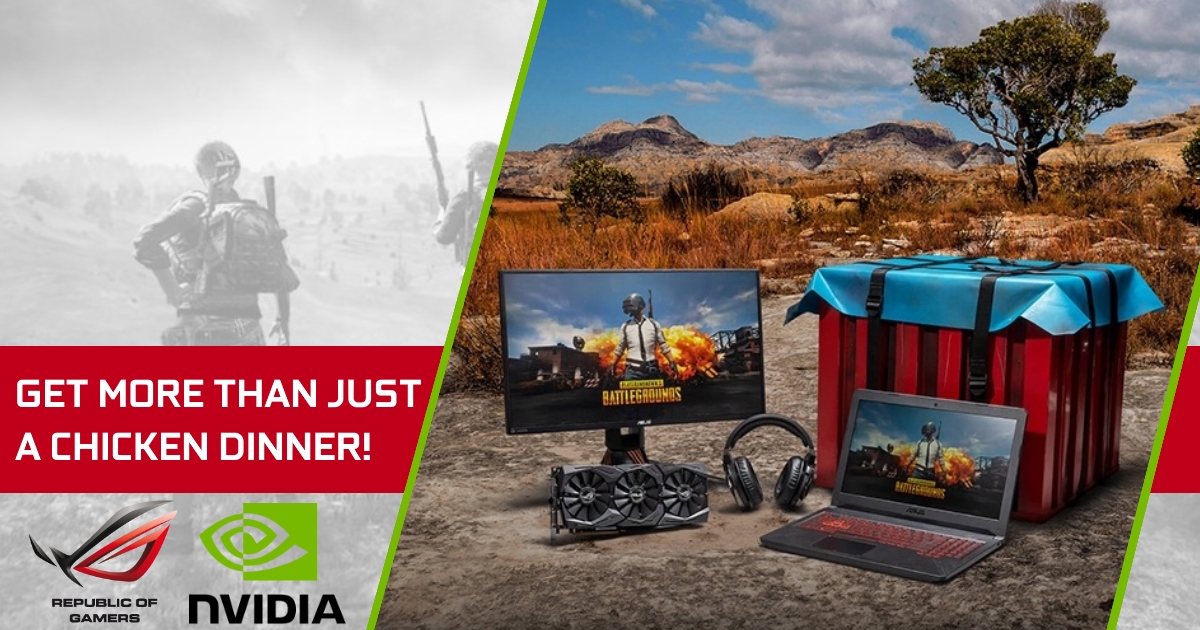 Another great promotion from Asus and Nvidia has just begun, this time specifically for gamers grabbing themselves Asus GTX Graphics Cards.

Simply purchase yourself an Asus Nvidia GTX 10 Series Graphics Card between the 1st June and 12th August 2018 then register your awesome new GPU for your chance(s) to WIN! I say chances because depending on the specific model you buy, you’ll qualify for a different number of entries into the draw.

Once you’ve got your new GPU be sure to register it for this competition on the Nvidia website linked below! 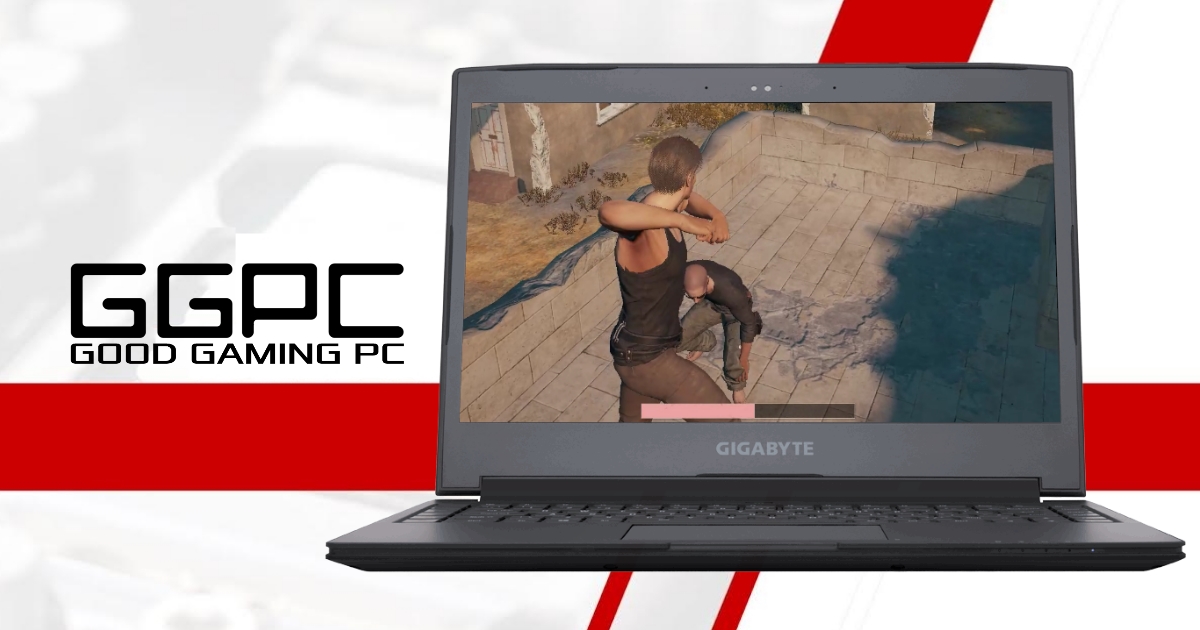 Recently we managed to get our hands on a very new gaming laptop from Gigabyte, an ultra slim and light AERO 14 with a GTX 1050 Ti inside! This was perfect as we really wanted to check out the GTX 1050Ti Laptop performance a game called Playerunknown’s Battlegrounds, but before we jump into gameplay FPS tests let’s take a quick look at the laptops full specs and design.

The Aero 14 is ultra thin and light, weighing in at around 2KG while being less than 2cm thick – it’s packing a popular intel i7-7700HQ quad core CPU with a 4GB GTX 1050Ti and 16GB of DDR4 ram. The display is a beautiful anti-glare 2560×1440 IPS, edged entirely in black with just a dash of orange and carbon fibre on the back of the laptop.

In addition to these, it also has a built in webcam and microphone which is good, a Kensington lock point and a nice white LED backlit keyboard for late night gaming. That ThunderBolt 3 port is great to see too, you can use these to attach an external graphics card boosting the power of your gaming laptop into that of top tier of desktop gaming systems!

Performance is general use is excellent, with the NVMe M.2 SSD inside booting into Windows 10 took around 4 seconds, with battery life under extreme load (playing Path of Exile while live streaming via OBS with FaceRig running) which gave us just over an hour (1 hour 1 min 17 seconds) – as a side note here, gaming performance is excellent on battery with the Aero 14, we recorded everything including the 20% battery tipping point when a laptop will automatically switch from the Nvidia graphics to intel integrated – let us know if you want to see this and we’ll cut out the boring bits then upload for you to check out on YouTube 🙂

Must be time to jump into some PUBG! (literally)

The game begins with an airdrop onto the island where 100 players proceed to battle it out until the last man standing is declared the winner. We specifically captured the 60-second gameplay video below to include the parachute landing, item grabbing and a player kill, while in a level with the heavy rain weather effect active.

This is because we’ve heard from players having issues on low/mid range systems, specifically when the player first lands, the specific issue being that the buildings and items have not entirely loaded in! This would almost certainly lead to disaster as these opening moments are a rush for weapons to defend yourself with.

As you can see in the video below, the Aero 14 GTX 1050 Ti Gaming Laptop has no such issues and we are able to gear up even in this densely contested area 🙂

We then continued straight on from the gameplay above, dodging crazy people with crowbars and getting into firefights – we even managed to get flash-banged yet survived!

For all tests we ran with the fans set to auto, you can use the included Gigabyte Smart Manager software package to tweak this but auto works perfectly, ramping up and down the fan speeds when needed.

Overall we’ve loved spending time with this laptop, the design is so nice and physical build is of the highest quality, the intel/nvidia hardware combination is superb and that Pantone certified display, along with the Dolby speakers is both suprising and beautiful. Best of all though, now that we’ve had a really good go with the new GTX 1050 Ti Gaming Laptop we can happily give it our GGPC Recommends Award – The Gigabyte Aero 14 GTX 1050 Ti is GOOD! 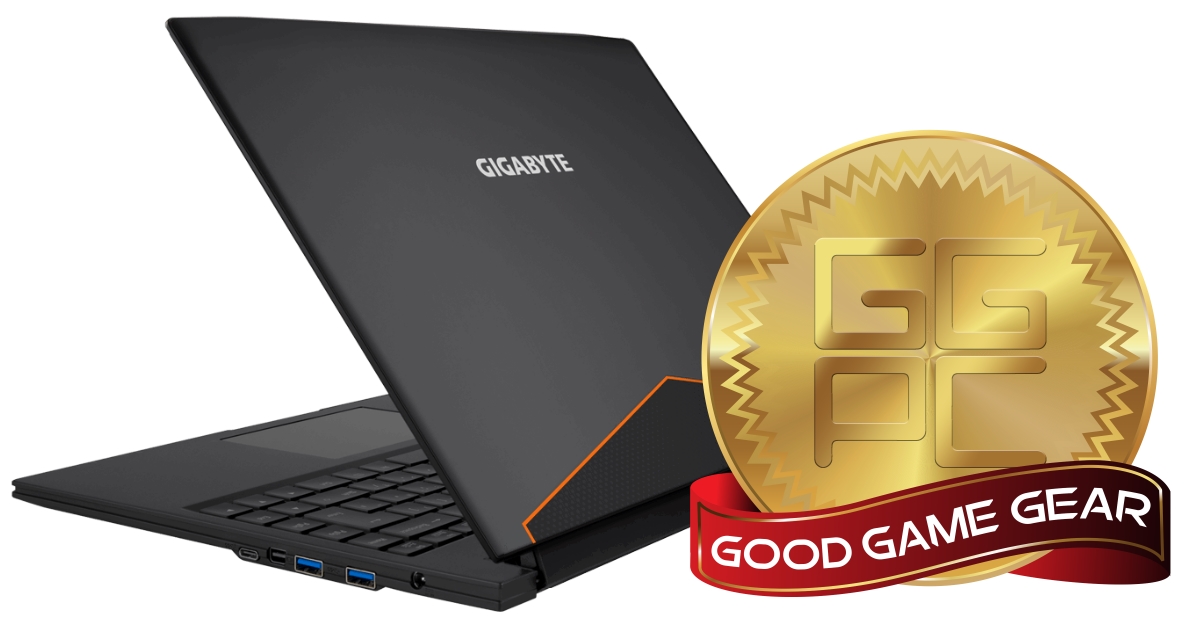